Over many years she also led countless Life & Witness Consultations, Vital Ministry Consultations, Joint Nominating Committees and participated in many various working groups to further the mission of God in GRP. Her contribution has been invaluable to those she has helped, mentored, and advised. She used her wealth of knowledge of UCA regulations and the history of decisions of both the UCA and GRP to progress the work of committees. Her use of a computer, attention to detail and good record keeping has been a great support to all who have benefitted by her willingness to take up a role.

Her gift for pastorally and succinctly getting to the essence of an issue combined with her strength of faith and Christian witness has been a blessing on all who received her letters, emails, e-cards and phone calls.

This is Beryl's response to being recognised:

I am honoured to be considered a suitable candidate to be a GRP Legend and hope that my story might be encouragement to others to respond to God’s call when it comes. I was born, at home in Rockdale, on 28th July 1939 - a surprise for my sister, Anita, who was six years old. She had been sent to play at a neighbours and finally came home to find a new baby sister whom she was invited to name. She named me Beryl Elva after her two best friends at school. 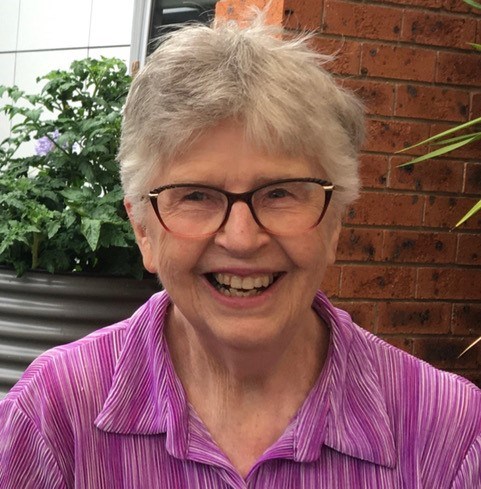 I have many happy memories of my childhood. Extended family coming for Christmas held under the plum tree; dinner being cooked on the fuel stove during the blackouts; visiting preachers coming for lunch after Sunday Service, the mystery of the air-raid shelter in the backyard. This was out of bounds except for when Dad went down there. It was dank and dark inside, but on the other hand it was a lot of fun to walk onto the top of the mound of earth that covered it and jump off into the sandpit.

I have special memories of my piano teacher, Miss Deacey, who held a concert every year in the Rockdale Town Hall to raise money for her Church. She arranged for four pianos to be on stage and everyone got to play. Even the newbies performed, sitting four to a piano each with their own part to play. Miss Deacey also taught me the pipe organ at her church, St John’s Church of England, and arranged for me to play there from time to time. I also played the organ at my church and the piano for Sunday School and the Sunday School Anniversary Services.

I was born into a Christian Home. God was an integral part of our life and my father was a Junior Circuit Steward and a leader in the Methodist Church at West Botany Street, Rockdale. I attended Christian Endeavour there in the morning followed by Church, then Sunday School in the afternoon and when I was older, Church in the evening. That was our usual Sunday.

In some ways, though, being born into a Christian home can be a disadvantage. As I look back, I know that when I thought I was a Christian, it was really just a facade, rather like the people Jesus talks about when he says they go about saying and doing the right things, but. . . It was not until I was 18, that I really found out what it meant to ask Jesus into my life and to really know Him and trust in Him. Since, then, I have tried to serve Him and to commit all I do to Him. It has not always been easy, and I’ve not always felt that I’ve been walking with Him. But I am assured that His love is never-ending and that He will not leave me to walk alone.

This was particularly evident to me one night in 1958. My parents and I had been to the movies at the Rockdale Odeon. We were walking along Bay Street going back to the car in the Church Parking Area, when a car skidded on the wet road, mounted the footpath and ran into us. My father died later in hospital and my mother suffered two broken legs and fractured skull. I had been pushed, or jumped into a shop doorway and escaped any injury. While most of the following week is blurred, I do remember the way in which Christ sustained me during the following days, coming to terms with all that had happened. The future looked uncertain, but I was comforted and sustained not only by my faith, but by the actions of others of faith who showed God’s love and compassion in all they did for me and the rest of the family.

I met my husband, Leigh at a Combined Churches Camp in 1965 and we were married in February 1966 on decimal currency weekend. We were blessed with three boys who are now married and live close by. We have nine grandchildren. Leigh and I agreed that when we had a family that I would stay home and not go out to paid work - and I am grateful for the way in which he supported me and encouraged me to find avenues to use my gifts in the community. While the boys were at Primary School I was Secretary of the Parents and Citizens Association, taught Scripture and played piano for the school choirs. It was through my voluntary work with the school choirs that I was invited to play the piano and the organ at the Sydney Opera House for three years, accompanying the Combined Schools Choirs – something I would never have dreamed of happening. My voluntary service through the school was recognized by the Education Department in 1989 when I was presented with the Director-General’s Award for Excellent Service to Public Schools.

During the 1980’s I was Secretary of the then Mortdale Parish which had three ministers looking after nine congregations – Oatley, Oatley West, Hurstville Grove, Mortdale, Penshurst, Mortdale-Oatley (Boundary Road), St Matthews Peakhurst Heights , Lugarno-Peakhurst. Then in 1991 I was invited by the Rev Colin Drury who was taking up the position of Presbytery Chairperson, to nominate as Presbytery Secretary. Since then, I have served God in various positions in the Presbytery and the Synod - Presbytery Secretary and Chairperson, PRC Chairperson and Secretary as well as being a member of the Council of Synod and also ACOMP. I was also Secretary and then Chairperson of the Synod Ministers Support Fund Committee and completed the Intentional Interim Ministry Training Program held in 1994.

As I write this, so many people come to mind who have influenced me and guided me on my Christian journey and I give thanks to God for them all.

COVID-19 has made it so difficult for us as individuals, as the Church, as the Presbytery, to be who God calls us to be. We have had to follow restrictions which have meant we cannot meet together or provide the support that as followers of Christ, we would like to give to each other. We have needed to find new ways of being, and cannot yet see what the new normal will be. But my prayer for us all is that we will continue to seek God’s guidance and strength, that the Holy Spirit will fill us with compassion and hope and that we will seek always to show Jesus to all those we meet.